Searching for a lost poet 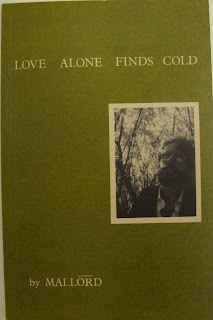 In the course of writing this biography I have found several trails leading to dead ends. But there is no dead end more intriguing to me than the connection between John Kennedy Toole and a poet who went by the name of Mallord.

His full name is Richard Mallord Silverman. He published a book of poems in New Orleans in 1969 titled Love Alone Finds Cold (Silver Bicycle Press). He gave Toole a copy and inscribed it January 20th, 1969--the day Toole fought with his mother and left New Orleans, never to return.

For years I have sought Mallord. In addition to the book of poems, I found two letters that he wrote to philosopher Bertrand Russell. From those letters it appears Mallord lived in Crestwood, NY in 1967 with a Laurie Gamola—or at least he was receiving mail through her. But here is where the trail ends: a book of poems, a New York address from the mid-sixties, his near obsession with the Romanitic poet Percy Bysshe Shelley as indicated in his letters, and a hitherto mysterious connection to American novelist John Kennedy Toole.

Perhaps Toole and Mallord were mere acquaintances, fellow students at Tulane, or perhaps they just shared a drink at a bar. Regardless, Mallord might offer insight into a time period in Toole’s life when he was shutting off from the world, succumbing to his consuming paranoia.

So I open up this question to you, dear readers, in hopes to find a way around this dead end. Does anyone have any information about the elusive poet named Mallord?
Posted by Cory MacLauchlin at 6:09 PM